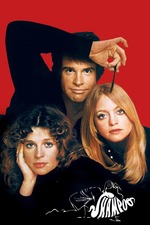 “The subject of Shampoo is hypocrisy, the commingling of sexual hypocrisy and political hypocrisy.” –Warren Beatty– (Easy Riders, Raging Bulls by Peter Biskind, 1998)

Shampoo is the kickoff film for Film Forum’s current two-week (Nov. 2-15) Hal Ashby retrospective, running all of this lesser known director’s '70s work. It’s an interesting choice as a starter, but I’m not entirely sure I agree with its placement. For the most part I’m a believer in running works chronologically. This way a viewer can see the growth, or lack thereof, of a particular artist while more easily placing the films within the political and social context of the day. Shampoo was released at the decade’s midpoint (1975) and to view it as such reveals how truly middling it is. A film with no clear auteur, Shampoo is a far cry from the scathing humor of the earliest work in the retrospective, Ashby’s debut The Landlord (1970), and the subtler yet no less pointed satire of the retro’s latest Ashby offering, Being There (1979).

Beatty’s statement in Easy Riders, Raging Bulls pretty much sums up the aims of Shampoo, and it's not hard to see the parallels in the movie between the story of Don Juan hairdresser George Roundy (Beatty) and the Nixon-Agnew election campaign of 1968. Indeed, the best parts of Shampoo are when these implicit parallels are made ever so slightly explicit to the point that they seem prescient about our own time. When George attends an Election eve function and one of his mistresses, Jackie (the radiant Julie Christie), proceeds to go down on him while fat-cat politicos watch in awe, it’s hard not to think of our own reactions to a recent White House sex scandal. The association hurts, but it’s also quite funny. The best satire should be like this, leaving us in a slightly confused state where we’re forced to confront our emotions and ourselves.

This extends equally to the final shot of the film where George watches, from a high vantage point, his one true love drive away from him. Seen from the back with George in the foreground and the car driving off in the background, this suggests a reversal of the famous footage of Nixon getting on the plane after his resignation. Placed as we are with Shampoo’s Nixon figure we come to understand his own feelings of regret and sadness. It’s something that the media footage of Nixon, and certainly the media footage of any politician nowadays, are pretty much incapable (or unwilling?) of doing.

Yet these examples aside, Shampoo rarely reaches similar heights. On the whole, the film feels low key and pretty disconnected from anything but its trifling story. I have my suspicions that this comes from the production history of the film. According to Easy Riders, Raging Bulls, Beatty was the main controller of the project, co-screenwriter Robert Towne was next in line, and Ashby was relegated to the sidelines. The struggling viewpoints are clearly evident, and the result is that they cancel out most of the satire. In moments like these when the political implications are unclear, Shampoo becomes either a minor comedic work, an ego trip favoring Beatty, or an outright, abject failure. Ultimately, the clearest thing to be said about Shampoo is that it truly is a reactionary product of its time. Made so soon after the Nixon-Watergate debacle it lacks the hindsight that might have focused its satirical aims. In a few weeks I plan on writing about The Devil’s Backbone, a recent horror film whose political allegory is clear, precise, and hard-hitting in many of the ways Shampoo is not. Stay tuned.

In spite of the mixed bag that is Shampoo, I nonetheless recommend everyone check out the Hal Ashby retrospective. My own suggestion for a “don’t miss” would certainly swing towards Harold and Maude (1972). One of the most delicious and tender black comedies ever made, it ably transcends its hippie-era-going-on-New-Age aphorisms to examine a most unconventional love story between the suicide obsessed Harold (Bud Cort) and the life-loving Maude (Ruth Gordon). Ashby’s camera seems to swoon with the characters and the Cat Stevens soundtrack provides a perfect musical counterpoint to what we see. Also on evidence is Ashby and writer Colin Higgins’ corrosive view of politics. Harold’s one-armed soldier uncle says more about false patriotism and lack of individuality than anything similar in Shampoo, and it helps that Ashby manages to make him an endearing character, all the better to sharpen the satirical point.