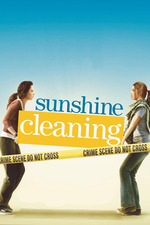 The similarities to that other Indiewood effort with Sunshine in the title have been well noted since Christine Jeffs’s film premiered at 2008’s Sundance Film Festival, so they won’t be rehashed here beyond a cursory acknowledgment and a quiet lament for the ruination that is Alan Arkin’s movie career. The veteran actor plays Joe, crotchety paterfamilias of the Lorkowski clan, which also consists of emotionally damaged daughters Rose (Adams) and Norah (Blunt) and somewhat “special” grandson Oscar (Jason Spevack). After one of the more embarrassingly expositional scenes ever committed to celluloid (bless you, Steve Zahn, for trying), Rose decides to enter the highly specialized field of crime-scene cleanup. This provides for many quirky stabs at dark humor—how does one properly dispose of a blood-soaked mattress?—and a half-baked way for the family to confront their long-repressed demons, which are revealed via a gauzy Once Upon a Time in the West-style flashback.

Adams and Blunt turn on their natural charm, Arkin’s near-senile oldster act seems less performance than semiexploited reality, and character actors Clifton Collins Jr. and Mary Lynn Rajskub (as, respectively, a one-armed cleaning-supply salesman and an introverted lesbian nurse) escape the wreckage with dignity and talent intact. Best to take a page from Rose’s métier and bleach this one fully out of sight and mind. (Opens Fri.)—Keith Uhlich