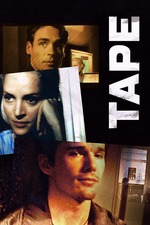 One of the many thoughts I did not address in my Mulholland Drive column of two weeks ago was how it focused and crystallized David Lynch’s work. That film managed to be original and new while incorporating many familiar elements from Lynch's work. The result was revelatory for me in that I came to a clearer understanding of where this particular artist is in his career, where his films fit in to my own tastes, and where he may be headed. All three levels of analysis, I might add, skewed towards the positive and the pleasurable—Lynch’s past cinema gained meaning, his present work naturally grew out of his past, and it finally pointed the way to a future filled with exciting possibilities.

I’ve now experienced the near flip side of this situation with Richard Linklater, a director whom I’ve admired up until now, specifically for the empathy he had with characters who converse. Slacker, Dazed and Confused, Before Sunrise, Suburbia (I haven’t seen The Newton Boys) were movies in which words mattered, from free-floating thought and two-way interaction and observation, to detached, ironic group-speak. None of these films are what I’d call masterworks, but they did suggest that Linklater had a respect and love for his characters and his audience that, when fully formed, could create works of transcendent beauty.

Having seen both of the new Linklater offerings, Tape and Waking Life, I’m not so sure if this is gonna happen. I saw Tape first and found it mildly interesting, though the cynicism of its three characters Vince (Ethan Hawke), Johnny (Robert Sean Leonard) and Amy (Uma Thurman), who share a darkly comedic and accusation filled hour-and-a-half in a motel room, seemed indivisible from the movie’s director. I didn’t mind so much upon first reflection, but it was upon seeing Waking Life the next evening that the sour taste of both movies grew to vile proportions.

Waking Life revisits the free-floating form of Slacker though with a different slant: The odyssey of its unnamed protagonist (Wiley Wiggins), through what may or may not be a dream, is animated, the drawings traced over live action digital video. The people he meets converse, in varying levels of intensity and passion, about issues ranging from government and guns to dreams and death. Where it all leads will no doubt be different for each viewer, but I won’t hold back saying that I found the movie offensive, condescending, and, barring the initial beauty of the animation, worthless.

On a surface level I would criticize the dialogue, which no doubt is meant to feel spontaneous, but instead comes across as flat and rehearsed, all emotion and passion drained. This wreaks havoc with any subtext that might be conveyed, and any ultimate transcendence for the character at Waking Life’s center. The ideas, flatly expressed as they are, clash and collide without ever building to epiphany. It’s near impossible to recall what people say in Waking Life, and thus, emotionally, the flow of words and ideas never takes hold. What we’re left with is a bunch of caricatures gabbing to the animated wind.

Yet the most offensive aspect of Waking Life, and this extends, to a degree, to Tape, is the literal presentation of its dreamscape. Movies, in themselves, are dreams—characters, stories, objects become symbols open to interpretation by the creator and his/her viewing audience. Waking Life ignores this tenet in both conception and execution. The literal-minded dialogue is mimicked by the animation in toto. Someone talks of Dostoyevsky clowns and we see Dostoyevsky clowns. Never is there counterpoint or juxtaposition in words and images, thus interpretation, imagination, and the fluidity of the best art are lost. This dreamscape insults with pointless talk and pretty pictures, suggesting that we are all babbling drones whose individual ideas will amount to nothing.

The best movies engage in an unconscious dialogue with their viewers. Lynch’s Mulholland Drive does this, respecting the movies-as-dreams tenet while using it to address both collective and individual concerns. It also mimics the stop-and-start nature of dreams where verbosity and silence (along with numerous other real-world contradictions) go hand in hand. Waking Life and Tape represent cinema at its worst, a literal brand of worthless claptrap where pretense and big words mask the emptiness in the movies’ souls. Where Linklater and his movies go from here is, in counterpoint to his newest works, an open-ended path. Yet, unlike Lynch, I now hold very little hope for the final destination.