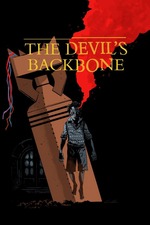 "We are going to inherit the earth. There is not the slightest doubt about that. The bourgeoisie may blast and burn its own world before it finally leaves the stage of history. We are not afraid of ruins. We who ploughed the prairies and built the cities can build again, only better next time. We carry a new world, here in our hearts. That world is growing this minute." – Buenaventura Durruti –

Buenaventura Durruti, a prominent anarchist whose historical actions spoke to and for the working class, died not too long after the beginning of the Spanish Civil War (1936-1939). Guillermo del Toro’s The Devil’s Backbone takes place near that war’s end. Yet Durruti’s inflammatory viewpoint, quoted above, provides some insight into several of the characters in Backbone's Santa Lucia School—a clearly laid out social strata of children, teachers, and maintenance workers, all engaged in their own class mini-wars.

Ten-year old Carlos (Fernando Tielve), the school’s newest arrival and bullying target of the slightly older Jamie (Iñigo Garcés), is the onscreen lead. The elder professor Cásares (Federico Luppi) acts as voice-over storyteller and, later, protector of the children from the greedy caretaker Jacinto (Eduardo Noriega). There are also two supernatural presences at Santa Lucia: the ghost of Santi (Junio Valverde), a child who died mysteriously in the school’s dank, atmospheric basement, and an unexploded bomb that landed in the school courtyard during an air raid and remains, tilted and ominous, as a reminder of the civil war raging nearby.

A ghost story on the surface, The Devil’s Backbone shows itself to be a disturbing allegory in subtext. The parallels between the Spanish Civil War and the events at Santa Lucia are apparent from the outset, especially in a social sense. The working class children live under the bourgeois teachers’ complacency, and both classes remain unaware of the danger lurking in the form of Jacinto, an anarchist of the highest order who would destroy both strata with little consideration of the consequences. Meanwhile, the ghosts of Santa Lucia (Santi and the courtyard bomb) act as reminders of civilization’s past failings, while their prescience of future events is easily ignored by the characters until loss of life is inevitable (an all too realistic metaphor, especially in our own time of crisis). When this occurs, the formerly apolitical and complacent classes have the politics of survival forced on them, resulting in unwitting uprising, revenge from beyond the grave, and acceptance of mortality and the uncertainty beyond.

It is with these ideas in mind that the politics espoused by Durruti become interesting in their flexible interpretation, especially when related to The Devil’s Backbone. Several of the characters, Jacinto being the most obvious, evidence Durruti’s viewpoint without question, while the children have had politics forced on them when survival dictates it. No surprise then that the film’s final shot is rife with ambiguity. As the children walk together towards an uncertain social and political future, the living Durruti no doubt would feel his beliefs prevalent among the new ruling class. Yet the fact that the ghost of a certain character watches over the children as they go suggests that, with ignorance of the lessons of our past histories, any new world will teeter on the edge of destruction.