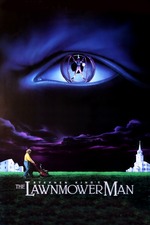 [Author's Note (03/27/2020): The "R"-word twice. Cringe. Different time, but still, mea culpa. I am happy, at least, that my teenage self was already scanning the character actor-populated margins.]

I went into The Lawnmower Man expecting to be horrified; after all, the novel it was taken from was written by Stephen King. I was horrified by the premise, amazed by the computer graphics, and surprised that I liked it so much.

The story centers around Dr. Larry Angelo (Pierce Brosnan), who has invented a computer program called Virtual Reality. This software consists of relaxation modes, futuristic video games, and a program that can make people learn at an astonishing rate. Dr. Angelo's goal is to make people smarter, and thus better.

The company he works for has a different idea. The company wants to make people into killing machines for use in wars. They have no idea of what they're getting into. Dr. Angelo's first subject is a chimp who becomes so smart it escapes from its cage and kills two officers, before being killed itself.

Dr. Angelo, distressed at this, takes a break from his work to think about what to do. He wants to use a human subject, but he doesn't know whom. In the end, he settles for the retarded man who mows his lawn. His name is Job (Jeff Fahey), and he has the mind of a child. Everyone, including the pastor who lives with him, pushes him around. He eventually gets revenge.

The computer graphics are the real star of the movie. Pierce Brosnan is very convincing as the frenetic doctor and Jeff Fahey gives a good performance as the retarded Job. Also watch for the hilarious cameo by Troy Evans as a jaded cop.

The movie isn't flawless. As with many other horror movies, there is a dumb kid who always seems to mess things up. And, like most of Stephen King's stories, it tales a while to get started. However, The Lawnmower Man is still one of the better book-to-screen translations I've seen in a while.