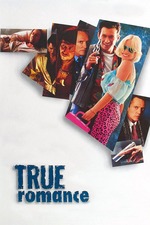 [Author's Note (04/22/2020): This is the first piece where I can see the influence of Owen Gleiberman's Entertainment Weekly reviews, particularly his string-things-together approach to sentence construction. I wrote about that influence in 2006, here.]

Two years ago, an aspiring director named Quentin Tarantino made his directorial debut with the great film, Reservoir Dogs, an ultraviolent tale of what happens when a robbery goes terribly wrong. Before becoming a director, however, Tarantino worked as a video store clerk, and in his spare time wrote the screenplay for True Romance.

Having enjoyed Reservoir Dogs immensely, I was quite pleased to hear of the release of Tarantino's new film. I made this clear to all my fellow juniors, who didn't share my enthusiasm. "Who's Quentin Tarantino?" they would ask. After having seen True Romance, I would rephrase the question to "Where's Quentin Tarantino?" It has none of the power and ferocity of Reservoir Dogs, but is instead a needlessly violent and pretentious mess of a film that, despite some good scenes and performances, doesn't come together as a whole.

The plot—stay with me on this one—is as follows: Christian Slater is Clarence, a worker in a comic book store and lover of kung fu movies. While watching one, he meets Alabama, a slinky call girl played by Patricia Arquette. The two spend the night together the next day, proclaim their love for each other, and are married in court by a judge. As a favor to Alabama, Clarence goes to the house of the pimp whom she worked for in order to retrieve her luggage. The pimp (Gary Oldman) wants Alabama back, saying so in an incomprehensible monologue after which Clarence kills him and takes the suitcase which he believes contains Alabama's clothes but in reality is full of pure cocaine.

They need the money, so Clarence and Alabama begin a cross country trek to Hollywood where they will sell it to a sleazy movie producer (Saul Rubinek). After borrowing some money and advice from his cop father (Dennis Hopper), Clarence takes Alabama and his Pink Cadillac out to L.A., where they stay with a friend and his drugged out roommate (Michael Rappaport and Brad Pitt).

Back at home, Clarence's father is murdered by the local mob boss (Christoper Walken), who owns the cocaine and wants it back. Meanwhile, the police in L.A. arrest the movie producer's assistant (Bronson Pinchot), and force him to wear a wire when the deal goes down so they can make a big drug bust. If you're still with me, Clarence and Alabama are now targeted by the police, the mobsters, and a few of the producer's bodyguards. I'm not giving anything away by saying that, in the overblown conclusion, everyone dies except Clarence, Alabama, and the ghost of Elvis (Val Kilmer), who occasionally gives Clarence advice in the bathroom.

Whoever said Christian Slater is a young Jack Nicholson should be hung for slander. Clarence is a character whom we feel no sympathy for. He's supposed to be the hero but is just as much of a sleaze as most of the other characters are. Arquette is quite good as Alabama, but the filmmakers make numerous efforts to exploit her, especially in a gratuitous scene where she is beaten up by a mobster and forced to defend herself with a toilet lid. And people say there are no good roles for women!

Val Kilmer is the ultimate Elvis impersonator. Mimicking the King's southern accent and even breaking into a rendition of Heartbreak Hotel, he gives one of his most hilarious performances since he was in Top Secret!, in which he played, what else, an Elvis impersonator. Brad Pitt looks and sounds like he was just returning from Woodstock, for in every scene he is either drunk or stoned. It must be a good performance, though, because, like a drug addict, you can't understand a word he's saying. Gary Oldman, a great character actor, is wasted as Alabama's pimp. Sporting the hair of Whoopi Goldberg, his voice lower than when he was Dracula, and speaking like a reject from Boyz n the Hood, he makes Brad Pitt's dialogue easy to understand.

The best performances are by the actors who have the least screen time. Dennis Hopper and Christopher Walken are terrific as the cop and the mafioso. They have a great scene together where Hopper insults Walken with a tirade of powerful dialogue, the one point where I felt Tarantino had regained control of his own movie. The person most at fault here is the director Tony Scott, obviously the wrong choice for a film like this. Known best for Top Gun, Scott shoves the violence into our faces as if asking us to participate in it. Tarantino on the other hand kept us at a spectator's view in Reservoir Dogs, so the impact of the violence was more chilling. The movie would have been different, and I feel better, had Tarantino been given total control.

I was very disappointed walking out of the theatre after True Romance. After all the hype I had lavished on it in school, I reported back that the movie was not as I had expected, but was in fact one of the year's worst pictures. I walked around feeling depressed for the rest of the day. Then I saw John Lennon at my locker…