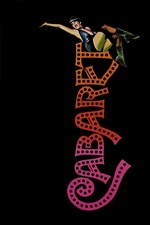 Performative distraction can only last so long. From the beginning it’s insisted that we leave our troubles at the door—in order to enjoy the fun, the sex, the parties, we must suspend our disbelief to the point of having no worries. Charmed and cavalier, we comply. Posters touting Mein Kampf morals become background pieces that establish setting, boys playing war in a field are merely a distraction from a more interesting conversation, and we’re too concerned with choreography and divine decadence to see the convergence of the two. The plot of the film we think we’re watching relies on the idea that life within the Cabaret is free; dress as you want, love who you want, be what you want—just so long as you forget your troubles while you do so.

There is an inherent risk to indifference; to letting dangerous ideas exist as pretty solutions. The first time we indulge in a world discrete from the Cabaret, we sit at a beer garden where a beautiful song, sweet and soprano, is being sung. But that tune, innocuously disguised as another musical number, soon grows sinister. It’s boasted by an intensifying choir of voices that are loathsome, loud, vicious, and by the time we realize it too many others have learned the words. The vitriol that we’ve been pushing to the fringes of our mind in favor of a story of sexuality and exploration is abruptly ubiquitous. Glued to the plot. The Master of Ceremonies catches our eye for half a moment with a devilish grin that seems to say, “See? You fell for it too.”

Everything in the Cabaret is an absurd satirization of the outside world, and we keep watching and laughing along because it’s suddenly too late to do anything other than suspend our disbelief. Maybe, had we paid attention in the beginning, that could be different. But now, no matter how hard we try to focus on the love story, the interactions between our liberated heroes and their futures, there is a world tapping its foot, waiting for us outside of the Kit Kat Club—a world where we’re not allowed to leave our troubles at the door.

So we sit beneath the stage, clapping and cheering as we let hedonism distract us from the animosity and anti-Semitism that has crept through the audience. It’s only when the performance is over, when we reflect to see that the seats around us are filled with those wearing an unmistakable red armband on beige, that we allow ourselves to mourn the show. Because, indeed, it was a fine affair. But now it’s over.