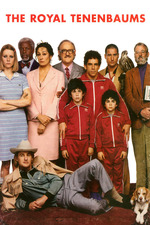 “Anybody interested in grabbing a couple of burgers and hittin' the cemetery?”

Wes Anderson has still yet to disappoint me, and if I’m being honest this might be my favorite movie of his right under Life Aquatic. I really loved Alec Baldwins narration throughout the film, his narration served as sort of a guide to catch the audience up on the characters after a long period time had past. Wes Anderson’s style of directing is flawless, even back in 2001 when this was made it feels flawless and somehow over the years it just keeps getting better. Mark Mothersbaugh’s score is so great this time around, it’s probably still to this day his best work. I love this movie so much, it's another example of how amazing Wes Anderson is at telling stories which can truly touch the viewer in strange and unexpected ways.

“I'll have a butterscotch sundae I guess.”

One of the best aspects of a Wes Anderson film is his ability to flesh out and develop each and every character in his story, with this film he once again succeeds at that, each character has something lovable about them, each character has an interesting quirk that makes them so unique and fun to watch. Robert Yeoman once again teamed up with Anderson to give us is masterclass cinematography, he’s one of my all time favorite cinematographers simply because he is able to capture so many things on screen at once, the best example of this in the film is at the very end, we get a tracking shot of all the characters off having their own conversations and interactions with others, it’s such an impressive shot.

“The crickets and the rust-beetles scuttled among the nettles of the sage thicket.”

The background and scenery of the film is really fantastic. The characters within the story are all so fun to watch, the writing is honestly incredible and the performances are equally incredible. Bill Murray is always a standout, unfortunately he didn’t have the biggest amount of screen time but anytime he did he stole the scene. Gwyneth Paltrow is really good in the film, I’ve never seen a performance like this from her, it really opened my eyes to how much range she has as an actress. Everyone was phenomenal in the movie but my personal favorite performance was from none other than Ben Stiller, he’s hilarious. Stiller’s character has so many memorable lines and his characters children in the movie are equally as funny.

Overall this film is FANTASTIC.

“Royal Tenenbaum bought the house on Archer Avenue in the winter of his 35th year. Over the next decade, he and his wife had three children, and then they separated.”