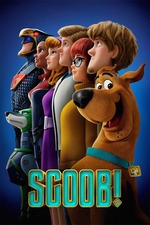 In the months before the pandemic, the trailer for Scoob! made me aware of a deep-rooted nostalgia that surprised me. I actually *wanted* a Scooby Doo origin story.

Fast forward to Spring and Scoob! was one of the few movie released via streaming while most of the world (including me) was in lockdown. No critics' screening for me...and $20 to stream. Ugh. So I waited.

Of course that wait put an impossible burden on Scoob! Now my anticipation had been building for months and the subsequent film had to justify making me wait. It no longer merely had to fan into flame a few childhood memories, it had to be...innovative, sentimental, substantive. I knew going in that it was inevitable that I would be disappointed.

Just how disappointed is hard to measure. For me, the trailers were misleading (big surprise, huh?). The film had no interest in being an origin story. The backstory is essentially a prelude to the film proper, a before-the-credits Bond sequence that has nothing to do with the movie that follows. Once the film went into the familiar theme song over updated animation, I knew I was in trouble.

What does follow is an hour long episode of Scooby Doo, which is not a bad thing. But updates came in the form of gags or culture references. Velma is dressed as "Ruth Bader Ginsburg" for Halloween, and the less brainsy pair of Scooby and Shaggy assume that is a minor Harry Potter character from Slytherin. A storefront in Venice Beach has an easter-egg reference to Casey Kasem. The mystery case ends up being about...yet you've stopped caring already haven't you? Me too.

There's nothing really wrong with Scoob! In fact, it might be an object lesson in how approaching a film with the right or wrong mindset can drastically alter one's film experience. But it is a film that is totally unnecessary. it exists so that it can have a trailer and the trailer is sufficient to accomplish all the things the actual film cannot.

Scoob! is like that high school couple at private Christian school who give each other promise rings indicating they are engaged to be engaged and intend to do something some day in the distant future. Nobody believes that anything will actually come of it, but we we understand those promises are sincerely meant and speak to a vague aspiration to be something less banal than what it is capable of being in actuality.

I spent most of the last half imagining all the great, risky movies this could have been. A true origin story in the tone of Isle of Dogs (or any other Wes Anderson). A comment on aging that reflects the place (or lack of it) for those who came of age in the 60s and 70s. (I'm already picturing the final credits playing to Billy Joel's "Scenes from an Italian Restaurant": the king and the queen went back to the scene, but you can never go back there again, ohhhhhhh).

I read somewhere that one of the creators wanted to make one of the characters openly gay but the studio objected. That strikes me as someone imagining they are thinking outside of the box when they are really in a slightly bigger box. After all, the heart of Scooby Doo is about the love relationship between a man and his dog. Imagine if Shaggy or Scooby were sick and had to deal with those who pshawed at their grief because our culture believers love can only hurt or heal when it is between a man and a woman. There's a glimmer of all that in the prelude when the young Shaggy opines that nobody understands the kind of sandwiches he likes and Scoob shows that he does. The joy of having someone who understands you and accepts you is immense when one is "different." But the film is so scared of genuine emotion of any type that even its instructive moments must be gags. We are told that this bond is special but we are simultaneously told that even the most special bonds are superficial.

Oh well, for 3 months of waiting, I at least had the pleasure of thinking about why the trailer resonated with me and all the ways the movie could be (but wouldn't be) something truly great.