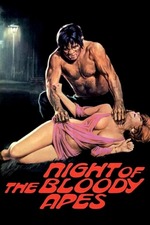 Night of the bloody rapes, AMIRITE?

Night of the Bloody Apes is such a mashup of early 1960’s style (and lady wrestlers) with gore and nudity all over the place. The gore is indeed heightened by the inserts of actual heart surgery footage including holding a still-beating heart outside of a torso. The other gore might be less convincing, like murdering a guy by ripping off his bloody toupee/scalp, but it’s copious.

In some ways the movie is quite sentimental. The mad doctor’s love for his son is the motivation for his experiment of placing a gorilla heart into a human being. Combining man and an organ from a less evolved primate triggers what is bestial in man, his less evolved instincts/drives, leading him on a campaign of rape and murder.

And turns him into a lumpy faced monster.