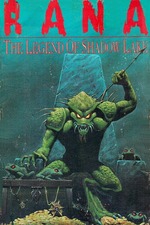 Rana: The Legend of Shadow Lake

Whether you call it Croaked: Frog Monster from Hell or Rana: The Legend of Shadow Lake, when you finally see the critter, he’s definitely a poor man’s sleestack.

Bill Rebane is a bit of a wild card, a regional horror movie creator from the depths of Wisconsin, dabbling in many a subgenre in his wacky two decade career. Here it’s the frog/fish-man sub-subgenre, of which I am hoping to become a completist.

Croaked/Rana plays out strangely, with a voiceover kicking in about 20 minutes in, and flashbacks that seem like they are still the present day. It’s really confusing, but it’s not too likely one is too committed to understanding the plot, which in this case regards an ancient race of frog people who guard a hoard of gold.

I would think this a mandatory double feature this with Bog (1979), amazingly enough, another Wisconsin frog/fishman cheapo indie.

You’re either the kind of person who enjoys this stuff or you’re not.

While the City Sleeps