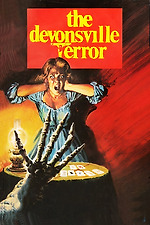 In the time since I last watched a Ulli Lommel movie (The Tenderness of Wolves), the man has died.

His work doesn’t get much love, but I thought that The Devonsville Terror was at least vaguely interesting.

Lommel co-wrote the screenplay with his then wife and star of the film, Suzanna Love.

It’s a tale of witchcraft in which it’s really about misogyny and oppression of the fairer sex, historically and in present times. And thus, a feminist critique.

It’s slow and dull and odd, filmed in rural Wisconsin.

The ending does feature an excellent face melt.

Psyched by the 4D Witch (A Tale of…