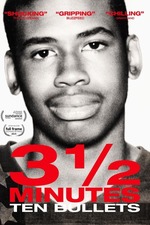 Four middle class black teenagers were playing loud rap music in their car while filling up at a Jacksonville, Florida gas station when a middle-age white dude chose to "stand his ground" and shoot to kill the fleeing kids. One boy died. This documentary examines in detail this famous event, emphasizing with actual footage the trial of the white dude which followed.

The filmmakers tried to remain neutral and just lay out the facts of the case as presented in court. However, by emphasizing the plight of the dead boy's parents, the deck was somewhat stacked. Still, by skillfully editing the actual courtroom testimony, director Silver has produced a true life morality tale as effective as any fictional drama.