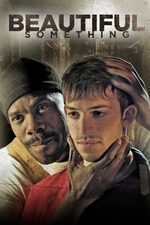 The unfamiliar actors (especially cute Zack Ryan as Jim and Brian Sheppard as the poet Brian) are quite convincing in their roles, mostly shot in extreme close-ups. I was particularly impressed with Matthew Boyd's cinematography, utilizing chiaroscuro worthy of Caravaggio to emphasize the shadows of the night and the sexual tension of all of the encounters (although talking to Boyd after the film, he told me that the projection at the Director's Guild was flawed by contrast settings higher than intended...I thought the effect had been done on purpose and worked especially well to emphasize the film's moodiness.) This wasn't an easy, feel-good film. All the promiscuous sex without condoms seemed rather retro. But director Joseph Graham has raised the bar for a realistic, literary, American gay cinema with this film, a niche that has usually been the province of today's French gay cinema.