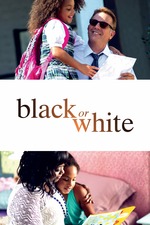 First of all the title of this film is Black or White. I wonder if they are ever going to change it in the database? No matter. The film will get a release under its real title...and it is a doozy of a film, well written (based on real events in writer-director Mike Bender's life), and beautifully acted.

It's a sensitive, emotionally truthful, film about a custody fight for a feisty, mixed race 8-year old girl. Extremely timely for 2014, the film is a variation on the Kramer vs. Kramer story, only the court battle is between a white grandfather and a black grandmother. The film gives its star Kevin Costner a memorable courtroom speech, and provides Olivia Spenser with another Oscar caliber role. Of course, just because it is a Kevin Costner film it probably won't leak over into the younger demographic that might really appreciate this film. Too grown up a movie. And gasp!, they used the "N" word! So that lets everybody else out. Too bad. This wonderful, timely film deserves to find an audience somewhere, somehow.