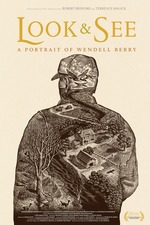 Wendell Berry is an 83 year old Kentucky farmer, author, poet and home spun philosopher. This documentary tells his story...small family farmer, nature lover, opponent of agribusiness and the government subsidies that encourage farm consolidation, crusading proponent of organic, back to the soil rural life. The film also tells the story of other farmers and their progeny, gradually forced off the land by economic necessity.

Personally, I'm traditionally as urban as it gets (although I did have my quasi-hippie return to the land period in the 1970s when I was in my 30s.) Yet through the power of Berry's words and film maker Laura Dunn's gorgeous imagery, I was overcome by a feeling of nostalgia for the beauties of the countryside and the romance of being one with nature. Every frame of this film is a beautiful visual...from the etchings which adorn the inter-titles, to the "Koyaanisqatsi-ish", stop-motion scenes of overpopulated, mechanized urban life, to the sun-dappled forests and loamy farmland scenes that could have been taken from one of executive producer Terrence Malick's films. I wonder if Berry's poetic narration extolling his rural philosophy actually makes any sense in today's world. But I sure wish it did; and I love this film for introducing me to Berry's world.

Neary's: The Dream at the End of the…

Joan Didion: The Center Will Not Hold