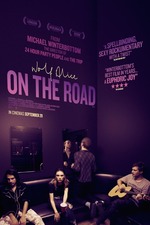 Michael Winterbottom returns to the music documentary genre with this intriguing hybrid (half-documentary, half fictitious love story) film. Ostensibly, the film follows the English rock group Wolf Alice on a lengthy tour of venues by boat and bus from Ireland through England, Scotland, Wales and culminating in a concert in London. Although there are copious amounts of concert footage from the band and their opening act, the film concentrates on an affair between the young female photographer sent on the tour by "management," Estelle (Leah Harvey), and one of the roadies on the tour, Joe (James McArdle). It was an interesting concept to combine reality with fiction; but honestly the love affair seemed superfluous. On the other hand, the group Wolf Alice (a foursome with a female lead singer-guitarist, a great drummer and two fine guitarists) really grew on me. Their brand of sweet, hard rock reminded me of an earlier similar group "Jefferson Airplane". The film comprehensively showed the ins-and-outs of modern day touring. Perhaps it ran on too long; perhaps a little pruning of the many venues the band played in would have been an improvement. Nevertheless, the film totally worked for me...simply because I fell in love with the band Wolf Alice and their music, talent and personalities.