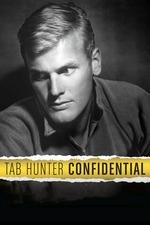 Of course, I'm old enough to remember the Tab Hunter era, the supernally handsome (although not particularly my type) no-talent actor/singer dreamboat and movie star. I first encountered him in Battle Cry when it was playing a 2nd run double bill with one of my all-time favorite films, East of Eden; and the unfavorable comparison of Hunter to James Dean was telling. I ignored most of the rest of his career...and when I was old enough that it made an impact, I noticed with some interest when he was "outed" in the scandal mags and whispered about as gay.

Now in his mid-80s, Hunter seems to be comfortable telling with no holds barred the entire story of his life and career: his love affairs, his relationships, the things this man kept so private until recently. Hunter, still handsome and as charismatic as ever, candidly narrates the film on camera. Director Jeffrey Schwartz and producer Alan Glaser (Hunter's long-time life partner) have collected a literal treasure trove of clips, memorabilia and interviews, and cleverly presented them on film with excellent graphics and brilliant editing. Make no mistake, this is an enormously entertaining documentary; but it is also an almost unprecedented history of the cost of the Hollywood closet told by one of the few participating survivors of the studio era. As such it is also an important film, disclosing first hand the hidden secrets of mid-20th century Hollywood, and incidentally disclosing that the real Tab Hunter is a nice, personable, shy guy who just happened to be good looking and a gay icon despite himself.