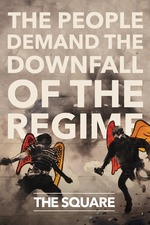 The eponymous square is, of course, Tehrir Square in the heart of Cairo, Egypt. It was the site of two years of hugely attended and important mass gatherings which defined the "Arab Spring" in 2011 and its aftermath...revolving door regime changes.

The film is comprised of on-the-ground videos taken in the square, mostly from the point of view of a few revolutionary (and often confused) young people. The film is remarkable for the rare action footage which takes the viewer right into the middle of the events. However, when the film attempts to get into the heads of the group of people it is following, it isn't nearly as successful. There's much speechifying and posturing; but very little insight into the actual thought processes. I never really felt I knew who these people were, even though that's what the filmmakers intended to impart.

This is history being made from ground level. I only wish the film made me care.