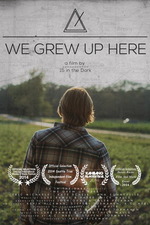 We Grew Up Here

Liam is a musician in Chicago whose past is disappearing after a breakup with girlfriend and muse, Lauren. Something seems off, and then it seems really off. Lauren is gone, and the music they made together is gone, and then the home videos, further and further away it slides, a cliff between reality and delusion, love and mental illness.

A live wire lead performance by Eric Michaels shoulders the narrative, utterly convincing in a trope, ‘is this real?’, that’s dead without a utterly convincing performance. He leads with a natural charisma, all heart on his sleeve, busted from a breakup but desperate to prove that what he sees actually exists, and that his home town of Tanglewood, Kansas has not disappeared from the map. He hits the road to find the truth, relocate Tanglewood, and bring back Lauren.

There’s a subconscious power in Liam’s persistence chasing something that no one else knows exists. His desperation intensifies at every turn and burrows inward as Liam blames himself, “I always thought what strengthened our relationship was playing music, creating a union beyond all others. I see now it’s actually what tore us apart.”

A promising first film by director Kevin Pickman and 15 in the Dark, a Chicago-based filmmaking collaborative. Free to watch on NoBudge: nobudge.com/main/2015/4/14/feature-film-we-grew-up-here