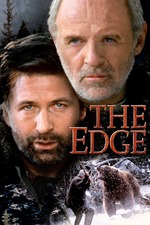 This is an intensely interesting, low-key film about what you’d expect from a David Mamet script: an exploration of masculinity from multiple angles.

I revisited it for the first time in a long while. It holds up.

Despite some contrivances that feel far more native to a stage than a screen, the overall narrative is intriguing and never asks too much of your suspension of disbelief. The cinematography is, on the whole, breathtaking and full of natural vistas that speak to the undercurrent of nature’s awesome beauty and our lost place in it. Some of the insert shots are betrayed by their lighting, but that’s not an uncommon problem with outdoor films that need to have controlled environments along the way.

Jerry Goldsmith’s score is magnificent and elevates the film past what you’d expect. Likely I’m rating the film higher than others would based on that.

But what makes a Mamet script work is good direction and Lee Tamahori deserves a lot of credit. He lets his actors find their place and their chemistry and never forces a moment or inserts dialogue for the sake of it. There are moments when he lets expressions and action speak, as they should.

Again, I’m sure there’s someone out there who finds this film a curiosity at best. But that’s not me. I think this is a rich work that takes the viewer on a meaningful journey.