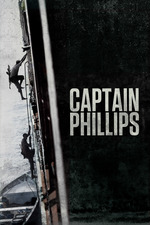 Captain Phillips joins alongside Prisoners as one of the more intense films I've seen this year. While the former is not as good as the latter, it's still a very fine film and certainly one of the best films of 2013. Tom Hanks, unsurprisingly, gives a fantastic performance as the title character. And the supporting roles are great as well. Many people have noted that the final fifteen minutes are the best part of the film, and they are 100% correct. I won't spoil it, but I will say that I was moved to tears, which is something that I did not expect to happen. I should also mention Paul Greengrass' great direction and Barry Ackroyd's effective cinematography. While I'm no fan of the shaky cam, it works for Captain Phillips. Here, it adds some realism to the film whereas in others, it just annoying and unnecessary. If I were forced to find a flaw, it's that the pacing drags a bit in some places. It does not bring the film down in any way, but I could still feel the length. Still, this is a great film and I'll be sure to find a spot for it on my top ten at the end of the year.