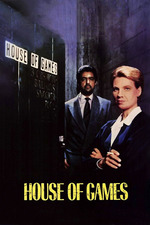 Love seeing early films in a director's career and looking for the things that made them great. The seeds that lead to true auteurship. Here you get just that in both Mamet's snappy, whip-smart dialogue, and also Mamet's casual loathing of women.

At first, I thought we would see a softer, more feminine side of David as his protagonist is a woman. But by the final scene, we see just how little these men regard "broads and bitches." The disdain is so bald by the end (an attempt to paint these "men" for who they really are) it's tough to think Mamet felt anything different.

Mantegna is pretty okay, but you really want somebody who can SING Mamet and the words just feel a tiny bit flat coming out of his mouth. Pacino would have destroyed this film.

The cons are really fun, and when the movie figures out what it wants to do, the ride is enjoyable (if not difficult to figure out) Part of me wonders if Mamet cared less about the ultimate con (I felt three steps ahead evey scene) and more about his signature style. All in all I was making dinner during this watch so I didn't necessarily care THAT much.