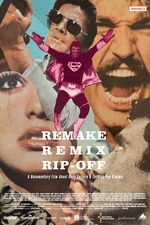 There are three main groups of people who should already know a bit about Turkish cinema. Turkish people, obviously enough. Germans, because a lot of the movies created ended up there. And genre movie fans after some of the most enjoyably ridiculous plagiarism that they can stuff into their eyeballs.

Remake, Remix, Rip-Off, to abbreviate it slightly, is a wonderful celebration of the sheer lunacy that was the Turkish film industry in the ’60s and ’70s. Many people may have heard of Turkish Star Wars or Turkish Spiderman, but this immerses you in a world of dubious pleasures such as Turkish versions of Dillinger, Bonnie & Clyde, E.T, Death Wish, and much, much more. You may struggle to keep your brain inside your skull while being bombarded with clips, but it’s worth it.

In between the many montage moments, many people involved in the business show up to talk about their experience. Whether it’s the perilous stuntwork, the limited amounts of film that they were allocated per movie, or the crafting of dolly systems that used tracks, a table, and bars of soap attached that would be made into smooth runners. Every new titbit serves as a reminder of just how lucky most people were to make it through a full movie with a) a full movie at the end of it and b) their life intact.

On the flipside of that, when not being impressed by what those in the industry actually achieved, and that includes ways of skirting around various censorship hurdles, it becomes apparent that few people involved see anything wrong with even the worst examples of repackaging footage from other movies. Many are still proud of what they were able to create, which is both understandable and also hard to swallow, depending on just how much of their movie was created and how much was appropriated from elsewhere. They claim that economic and cultural circumstances often forced their hand, but that’s an interesting argument that leads us all to some very muddy waters. And that’s what makes this such an interesting documentary. It’s a bit of fun, yet there’s a depth there which would make every main sequence the perfect jumping-off point for discussions on a variety of topics such as piracy, story structure, health and safety in the workplace, the rights of actors, and much more besides. Come for the terribly cheap superhero movies, stay for the thoughtful dissection of the cinematic landscape prompted by deceptively lightweight content.

Genre fans will already know that they should see this. But anyone with an interest in cinema should give it a go. You might not like everything you hear, but you’ll find the context and attitudes fascinating.