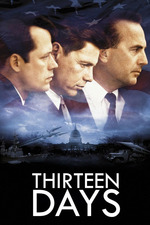 When it works, it works. But damn! if this movie is flatly directed. Any given scene could be the scene you just saw...for 145 minutes.

Also worth noting that Donald J. Trump should watch this film and take notes. It's about a team of politicians actively trying NOT to go to war. He probably wouldn't get it.