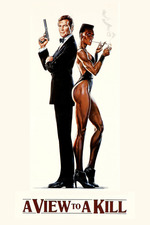 I think this was the first Bond movie I ever saw. Which makes it such a pity to revisit and find that it’s utter crap. That’s owed largely to director John Glen’s journeyman approach which concerns itself only with moving from set piece to set piece, indifferent to character motivation or narrative logic. It’s an indictment of the Broccolis’ vast dearth of cinematic taste that they thought this guy was good enough to direct a generation’s worth of Bond movies.

But Roger Moore is also to blame here; the knock on his portrayal of Bond was that it never really communicated a sense of danger, of any real stakes. That’s true here too, because the disparity between what Moore is able to do on screen—largely just quips and reaction shots—and what his stunt doubles do instead—virtually anything requiring physical agility, and flagrantly easy to spot—is virtually a chasm. But weirdly, for the first time there is a sense of danger in the air, because sadly the role was written without regard for Moore’s age; as you watch, it’s hard not to worry he might hurt himself.