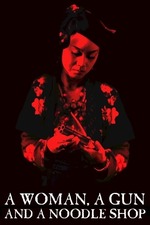 Ironically the thing that drew me to this movie, the fact that it’s a remake of “Blood Simple” transplanted to 19th century China, is what most got in the way of my enjoyment of it. I spent way too much time trying to match up characters and plot points to the original, which was especially difficult in the first half which is quite a bit different in both substance and tone.

As a remake, this film is not hugely successful but it is at least true to the Coen Brothers’ original in how it delights in being a playfully, almost perversely inventive exercise in filmmaking. Its aggressively abstract shots of a barren desert landscape and extensive day-for-night scenes, all photographed in eyeball-piercing high-dynamic range, make it seem almost like it takes place on some weird, distant planet. What’s even more disorienting is the nearly slapstick sensibility, which eventually morphs in a strangely effective way into something closer to the Coens’ more familiar sardonically fraught tension. In the end though it’s memorable mostly as an oddity of cross cultural transference of idiosyncratic impulses, and not much more.