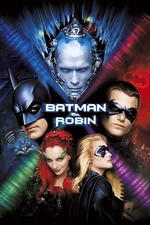 Somehow I never watched this the whole way through but in honor of Joel Schumacher’s passing I thought I would give it a shot. It doesn’t miss a beat; right out o the gate it’s flat out terrible. It’s almost as if Schumacher was purposefully going for the world’s longest record in terrible dialogue, inane delivery and idiotic plot twists. In the course of it, he effectively sprays refuse or worse really on all involved—no one comes out of it smelling like roses, and it’s a miracle anyone was able to salvage a career beyond it. Clooney, in particular, is not just miscast but is almost actively undermining his own performance—it’s easily the sloppiest, least committed and laziest rendition of the character on record.