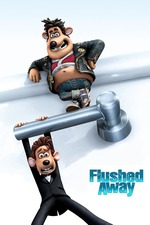 I spent a lot of the time watching this movie wondering whether it’s actually the stop-motion clay animation itself that makes Aardman’s other movies so beguiling. Because while a lot of the requisite humor and sense of mischief seems to be present in “Flushed Away,” it doesn’t quite work, never really achieves critical mass, and on the whole it feels significantly less inspired than even the most humdrum of Aardman’s clay-driven films.

Maybe it just goes to show that if you’re going to make a foray into CG animation, it just doesn’t pay to skimp on the rendering. The 3D modeling and animation here is lackluster, even by 2006 standards; there’s only the faintest hint of the kind of detail and care that you’d find in Pixar films from the same era. Plus, it’s just kind of gross to spend a whole movie hanging out with rats, slugs and maggots in the sewer.