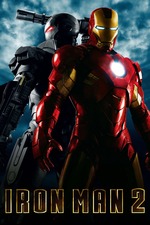 Rewatched with my daughter and it was slightly less intolerable than I remembered.

Even if you can set aside the fact that for most of this movie the Tony Stark character is essentially an odious narcissist, that’s not even the crux of why this is so tiresome to endure. The movie coasts heavily on Robert Downey Jr’s charm, or the allegedly deep reservoirs thereof, a quality that has always struck me as being incredibly disingenuous and it has rarely seemed as overtly disingenuous as it does here.

That charm seems to rest on Downey Jr’s admittedly impressive ability to stand outside of a narrative as a kind of comic commentator, and Favreau allows him to quip interminably, to the point where it’s not just a quirk, it’s an annoying tic. That sardonic, detached meta dialogue is nothing new of course; we’ve seen it countless times before in countless other movies. What’s different about Downey Jr is that he wants us to believe he’s above the nonsense when he’s so clearly not; he insists he’s outside of the absurdity of the super-hero proceedings but of course he’s so deeply embedded and invested in the hollowness of it all. It’s just profoundly hypocritical, and it makes the idea of the corporate franchise even harder to swallow than it already is.