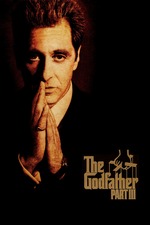 This tricky, frustrating movie. Whether you call it “The Godfather: Part III” or “Mario Puzo’s The Godfather, Coda: The Death of Michael Corleone,” it’s hard to argue that this measures up to its predecessors. That doesn’t mean it’s all bad, though, or at least it doesn’t mean it’s as bad as its reputation suggests. The performances are by and large quite good; Andy Garcia is terrific and makes you want to see more, and even Sofia Coppola, with the benefit of hindsight, is far from terrible.

This new “Coda” cut even improves upon the original theatrical version, but only by degrees. Unfortunately it’s still largely the same movie, beset by the same glaring difficulties: namely, the bizarre decision to dress up the movie’s late 1970s setting so that it looks basically like 1990, and the woefully under-baked script. Most of the plot is sensible, but the dialogue and many of the setups are creaky, lacking the extreme elegance and nuance of its predecessors. As much as I wanted that to not be the case on watching the “Coda” cut—as much as I wanted this movie to be suddenly revealed as a masterpiece hiding in plain sight—these are not things that can be fixed in the editing room.