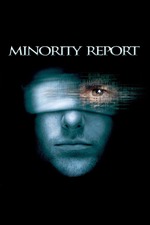 Aside from delivering the names of murderers and victims in the form of highly polished wooden balls (what?), it's amazing to look back on this movie and see how much of it has come true: ad tracking, technologized drug delivery, gestural computing, AirPods, etc. I’m not even sure there’s another movie that can compete with it in this department.

It's also still a really entertaining sci-fi noir. Spielberg's direction is fleet and mostly incredibly breathless; he keeps the action moving along incredibly well and only rarely stops to indulge in his more groan-worthy instincts (a chase through a car assembly plant that ends with the protagonist getting away in a brand new car is just ridiculous). Cruise and Farrell are superb as well; the latter’s naked ambition—as a character and actor—is effective as an adversarial force for the former.

What doesn't hold up so well is Janusz Kaminski’s over-processed, blown out cinematography. On the one hand it looks superior to similar films from that era that contended with CG imagery—I'd take this aesthetic any day over what we got in "Lord of the Rings" or the "Star Wars" prequels—probably because the heavy use of over-exposure helps the primitive 3D modeling blend in better. But it’s also a consistent visual irritant, like a layer of gauze on every frame of the film. It would be interesting to know whether it's Kiminski or Spielberg who advocated so heavily for this style; as an artistic choice, it's one of the least appealing of the era.