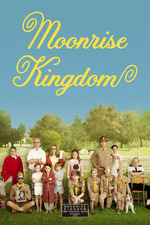 This is one of my daughter's best friend's favorite movies so she wanted to see it for herself. I had actually just rewatched it a little earlier this month, for the first time since its initial run, so I was a bit reluctant.

But something really weird happened. On my third viewing, I actually found the characters and situation kind of delightful. This is in marked contrast to when I saw it in theaters, where I thought the whole thing was "Darjeeling Limited"-level sloppy, and my second viewing where I still couldn’t see past Anderson’s overbearing aestheticism. But on this third viewing, I found it surprisingly charming, and I understood the two protagonists, and their bond, better than before. And, I have to admit, I just sort of allowed myself to enjoy living in Anderson-world for a while, a pleasure which I'm usually half fighting.

That said, I still did partially fall asleep for the final fifteen minutes or so.