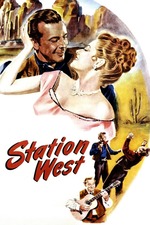 Most bad movies come down to bad scripts first with everything else slipping away from the cast and crew thereafter. This one actually has a decent script, or it would seem to. Nearly every line was written within an inch of its life, loaded with snappy retorts and clever turns of phrase. It’s clear that a real writer wrote this, but the writing is so cocksure and, frankly, cynical, that the result is almost noxious. When the actors talk it doesn’t sound like talking it sounds like writing. It doesn’t help either that the plot is obtuse, but not fascinatingly obtuse in a Dashiell Hammet way, just blandly obtuse in a “this is not particularly believable” way, and also really in a “why should I care” way. Maybe it all comes down to leading man Dick Powell who is so unconvincingly tough that he spends all of his time acting tough, and so unappealing that he spends all of his time trying to convince us that he doesn’t care if anyone likes him. Job done.