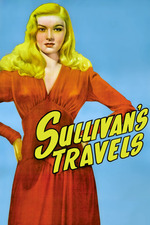 Is this really Sturges's masterpiece, or just his most pointed declaration of ideals? For a film that plants a flag in the ground for the virtue of light comedy, "Sullivan's Travels" isn't actually very funny—it’s just mildly amusing, really. Nor does it really deliver on the grim or realistic neorealism that the story posits as comedy's antithesis—most of the gritty stuff is not observed as much as it is impressionistic. Part of the problem is Joel McCrea, whose milquetoast handsomeness just can't pull off the pretense of Sullivan as some kind of genius—or even a talented hack. When in a pivotal moment in the last reel Sullivan breaks out into what is meant to be deep, soulful laughter, McCrea’s delivery is stilted and unconvincing. In a manifesto about comedy, that is a fatal flaw.