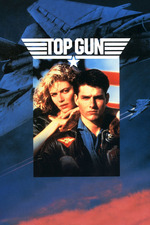 It’s actually unclear to me if I’ve ever seen this movie before. Over time so much of it has seeped into popular consciousness, but viewing it today it’s surprising how little there is here. Beyond the copious, exhaustingly repetitive stretches of jet fighters and crew taxiing, taking off and landing—photographed, like everything else in this movie, with exquisitely and overbearingly stylized beauty that still looks amazing to this day—there’s really only a wisp of a plot. The hackneyed, tedious script is an impoverishment of ideas and of character development, enlivened only by Tom Cruise’s irrepressible mugging—not a performance, really, as much as a continual series of guest appearances in his own movie. It’s easy to recognize his early star quality here, which was shockingly broad but also quite shallow. It’s much harder though to see how he would ever add substance to the charm.