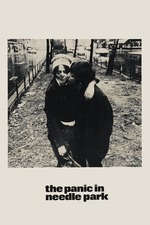 Zoë and I watched this movie, Al's first starring role, for his 80th birthday. Every part of this movie was tragic. From the very beginning, even as Helen and Bobby are falling in love, you know where there love story is going to go, and so from the get go you're filled with a sense of pessimism and fear. There were multiple times where Zoë would say, "Wow this is rock bottom," and then five minutes later we'd be like "wait no this is rock bottom." This entire movie, especially the end, felt hopeless.
The first thirty minutes of the movie made me fall in love with Bobby (as expected) and Helen, and then the rest of the movie successfully broke my heart more and more.
This movie clearly established some of Al's signature character traits, such as wearing a bandana, playing a character named Bobby (if you haven't seen Bobby Deerfield please go watch it), being abusive to women :(, having killer outfits. It really established the 70s Pacino vibe, which, in my opinion, is Pacino's best decade. After the 70s, he begins to be typecast as the tough guy (in the footsteps of Scarface) or the casual misogynist (such as Scent of a Woman and Frankie and Johnny). His characters became dependent on his signature yelling, using it as his main character trait rather than an effective tool to be employed thoughtfully. His 70s characters have so much more depth. In this movie, we get to see Al as a romantic lead (which he plays perfectly here and in Bobby Deerfield, so why we didn't get more of this will forever baffle me), a goofy jokester (a la Scarecrow, another one of my favorites, by the same director), as an enabling, controlling, and abusive partner. This movie just really reminded me that 70s Pacino is the best, and Kitty Winn was equally compelling. Watching her become dependent on a man whose every choice worsened her life was heartbreaking, but also Al is so compelling that at least at the beginning I wanted them to fall in love even though I knew what was going to happen. Damn this movie was sad and that is all the nuance I have for today.