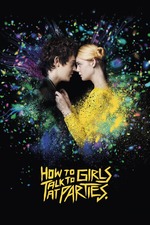 How to Talk to Girls at Parties

This film has some nice moments, but goes along a conventional path!

It has some ideas that could have been worked on and made more profound and stranger.

My favourite scene is at the very end, it moved me!

Some decent acting from the main two, but the writing and direction did not go deep enough to be anything great, at least its a weirder version of this same basic plot thats been repeated for many years!!

Liked the weirdness, a sucker for some interstellar romance, or just romance in general if i believe it and it did get me a little!
But it just doesn't pull all the punches and after all its weirdness it retreats back into the safe zone!!

well i think i have repeated myself!

i could say more, but hey, if your up for something conventional yet weird, that occasionally breaks out of its own trap, give it a go!