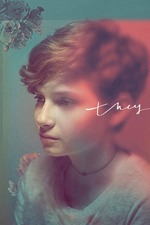 Id say the best things about this film is that it contradicts a lot of the popular way of making films, well known actors, intriguing clear dialogue that doesn't overlap, fast editing of shots, very specific story lines that keep the audience engaged.
This film sheds some of these for a more natural approach, some of my favourite elements are the small touches, little things people do.

Its shot well, lovely tone to the film, some beautiful imagery.

Its a subject i think is very important, it explores it in a subtle way.
I would kind of like to go deeper into J's world, learn more of how they feel.

It is kinda slow since the focus is on daily life rather than a deep intriguing fast moving plot.

There are several social elements that surprised me, refreshing to see certain interactions that contradict how people are often portrayed.

The acting is very gentle, people are just people, its not perfect, but there are some really nice moments and some that don't work so well in my opinion.

there were a couple of difficult moments for me, it allows for silence and chaos of daily life, sometimes you are left to meditate on the moment.

Because of this downtempo realism it is genius, its not there to entertain you, its here to allow you to explore what it expresses.

well, thats one way of putting it!