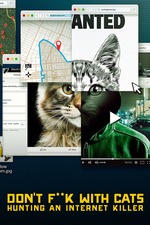 "There's one unspoken rule on the Internet. And that's that you don't fuck with cats."

I feel extremely conflicted writing this review. On one hand, I believe it's horrible that this documentary exists and I don't want to give it the slightest bit of attention. On the other hand, this is a site for reviewing movies and miniseries, and I want to review this because I feel so passionately about what I have to say. In short, my review is this: please do not watch it.

This has nothing to do with the documentary itself. It is competently made, with good shots of cities and informative interviews. There is a lot of evidence to accurately tell the story. It uses shock value and well-crafted suspense to pull in the viewer and at first, this appears to be a very interesting documentary about a subject most know little about. I understand why this became so popular so quickly. That doesn't mean it should.

Don't F**k with Cats tells the disgusting true story of a man who released videos of himself torturing cats onto the Internet. A group of extremely naive people (I'll get to this later) got soaked up in their hatred and their hype, feeding on one another's anger, and launched an internet investigation to find this animal abuser. Concerned this man would eventually murder people instead of animals, they reached out to the police. The police did not listen, because it was a bunch of people on the internet stalking a man who killed a cat for online attention, and these people had no evidence the man would kill an actual person. The man killed a person and posted the video online, sending body parts to government and educational institutions. The police eventually arrested this man. He is now in jail. That is the whole story, for anyone who was interested (and I don't intend to spoiler tag this because a) it's a true story and b) anyone who was curious can now read the story and hopefully will no longer want to watch the documentary).

I have a serious problem with some true crime documentaries. Sometimes I understand why they are being made, and I believe it's a totally different story when the documentary covers a criminal who is no longer alive. They are absolutely interesting - I am someone who has Zodiac in my favourite movies, loves the Netflix series Mindhunter, and has read Helter Skelter more than once. I enjoy true crime podcasts and watch documentaries - but I am only okay with this when the subject is dead or otherwise unable to profit off of the attention given. This brings me into why I hate Don't F**k with Cats.

The man (who I refuse to name, and I ask that nobody names this man either) responsible for this murder is alive. He has the opportunity to be released from prison before he dies. And, most importantly, he loves attention. He did everything he did for attention, which is something this documentary addresses multiple times. There is a particularly disturbing scene where the main person being interviewed says she believes it is her involvement, as well as everyone else who pursued this man online, that led to the eventual murder. She claims that it is the attention they gave this man that led to the cat-and-mouse game the killer found so entertaining. Now, I would never - NEVER - blame a person investigating this case on the murder. It is the murderer alone who is responsible for the civilian's death. However, I am extremely confused how this woman claims to understand that it is attention which made the situation worse, and yet was willing to participate in a Netflix documentary that does nothing but give this man more attention. There is no reason to give this man any attention. Just let him rot in jail.

Secondly, it annoys me that this documentary follows the people who stalked this man online more than the actual police and investigators who were responsible for the arrest. This has nothing to do with if they did a good deed or not - it can certainly be argued they helped catch the killer and kept him from committing any more murders. This annoys me because it's impossible to make something a TV show, movie, etc. without glamorising the subject. The simple act of creating an accessible resource that tells this story with aesthetically pleasing cinematography and a beautiful score glamorises a horrific story for entertainment purposes. By putting the spotlight on the people who found this man online through internet searching, I'd argue it encourages viewers to do the same thing, which is incredibly dangerous. The main woman even shares the story of the murderer recording a video of himself walking through her place of work. She put herself, her coworkers, and her family in serious danger by pursuing this man and I think making a documentary that glorifies this is extremely dangerous. People should not be stalking abusers and potential killers online, as this puts themselves and the people around them at serious risk. Glamorising and even encouraging viewers to do this - especially younger people who will be more likely to watch this and have more time to spend on the internet - is incredibly horrifying to see.
Edit: I forgot to mention originally that the documentary even addresses how this Facebook group of self-proclaimed investigators actually drove a totally innocent and mentally ill man to suicide through false allegations and some seriously disturbing cyberbullying. So, I'm really disturbed this documentary is glorifying this group of people.

Finally, the killer recorded everything he did and posted the videos online, hoping for lots of views and attention. This documentary SHOWS THESE VIDEOS. It shows the before and the after, and even if it doesn't show the worst moments of the videos, it forces those being interviewed to watch and describe the videos. How, exactly, is that a good idea? It's extremely disturbing and the man made these videos for attention - why the hell are we giving it to him?

This is poorly written and I apologise, but this documentary made me so angry I had to pour my reasons out here. It's disgusting, shouldn't exist, and I beg that you do not watch it.