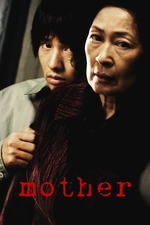 Another Bong Joon Ho thriller that delivers on every front; humour, sadness, pain, thrills, and mixes all of those tones seamlessly.

Although it's a step down from Parasite and Memories of Murder (which speaks a lot more about those 2 films because almost every film is a step down from them), Mother packs the twists and emotional prowess of both, sometimes even more. It is a surprisingly dark film with grounded & realistic dialogues with no lines wasted on needless preaching and philosophizing.

Watching analysis videos about the filmmaking techniques and hidden content is a must for me after finishing a Bong Joon Ho film. There is something to unveil in nearly every scene, and noticing the number of detailed efforts blended so smoothly into the film makes me appreciate it more. Here he uses clever concealment and shooting profiles to add to the uncertainties and mysteries about the murder case. It's the sort of thing that most don't directly notice when watching, but it subconsciously affects their experience of the film.

Pacing and visuals are the biggest difference between this and his 2003 thriller masterpiece. Akin to the dialogues, the film is visually more grounded and constricted, fitting with the distant nature and mystery surrounding the plot and its characters. The pacing is occasionally a bit too slow for my liking without the gorgeous visuals of Memories of Murder that could be stared at for hours - with the obvious exceptions of the stunning opening and ending scene.

The two central performances are impeccable, giving ​plenty of different emotions between them. From funny to devastating, they play their roles perfectly and make their mother-son relation feel entirely real and emotional.

Mother is a mystery thriller about a man charged with murder and the lengths his mother will go to prove his innocence. It is basically about mother love, but without any clichés or cheese, and more proof that Bong Joon Ho is one of the best filmmakers of the past century.