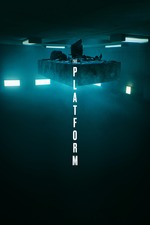 this film struck such a nerve with me i just cannot articulate how much i loathe it. Just like 'mother' it straddles a line of trying to be a compelling narrative and trying to be a metaphor for 'Society' and completely fails at both.

it's one of those films where people say they liked it because 'hm it makes you think' but... it doesn't. if you actually think about it for more than 20 seconds the premise completely falls apart and ultimately contradicts itself at a fundamental level because it lacks any justification or context. for example, and there are many, if the whole idea is that it is a metaphor for trickle-down economics, and the class system and distribution of resources then how can you explain the inane, random monthly shuffling of the prisoners each month; like what is the real-life equivalent of this random reshuffling of your access to resources? there isn't one; a better metaphor would be that you get put on a level and you stay there indefinitely while the system alienates you from people on the other levels, but that wouldn't be a compelling enough story so it just makes shit up for tension to justify the screen time. You'd think that a film about 2 people essentially just locked in a room the entire time, it would at least be an exploration of human nature, but it can't even achieve that.

This film is essentially a thought experiment played out on-screen which doesn't meaningfully challenge you on any belief you'd already have before you started watching because it's so removed from the reality of class struggle and human nature and distribution of resources and power. it fails as a metaphor for inequality, it fails as a film to have a compelling storyline so it just makes shit up, and like so many films that rely too heavily on an 'interesting premise' it has the most banal, lack lustre ending which satisfies literally none of the plot points or the systemic injustices the film attempts to portray.

As you can tell i deeply detest films that try to be hashtag deep but don't actually engage with any philosophy or praxis or offer any thought provoking solutions or alternatives to issues they highlight, so with the absence of this film having any meaningful message or at least being entertaining to watch, it ultimately is just two plain white guys sitting in a concrete room staring at a wall, hating the situation they've found themselves in, which is coincidentally how i felt after watching this vapid wreck.