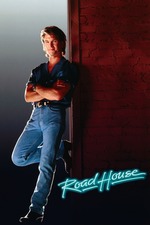 Road house is a film of two halves for me. One which initially balances the fine line between a fun 80's cheese-fest and pure unadulterated cringe, right up until the second half, where it uncontrollably derails into the latter. I mean the first fifteen minutes are incredible. There's a lot about this film that's objectively brilliant. The screenplay is great, some of the dialogue at the start is super memorable and the soundtrack is a blast. It was seemingly starting to make sense as to why Road House is referred to as a cult classic, but god, the second half completely eliminated any notion of that for me.

An otherwise cheesy yet brilliant 80's action flick marred by what's possibly the cringiest set of film villains I've seen in quite some time and an absolute debacle of a climax.