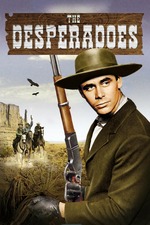 Randolph Scott gets top billing in The Desperadoes, but he's really just a supporting character as the main plot revolves around a young Glenn Ford as an outlaw trying to go straight. This films ticks off all the boxes on the formulaic checklist, but at least it does so with style and skill. There's an odd but not unenjoyable mix of brutal violence and slapstick comedy going on here, particularly in the requisite barroom brawl, which is hilarious. Edgar Buchanan of Petticoat Junction and Big Boy Williams provide comic relief throughout, while Raymond Walburn plays a very broad caricature of a hanging judge. Meanwhile, Ford's playing a Utah Hamlet. Filmed in Technicolor and ably directed by Charles Vidor, this isn't the most memorable of westerns, but it is satisfyingly exciting at times and always good fun.

The Ballad of Lefty Brown