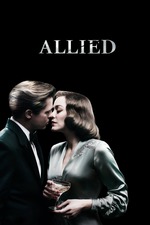 An old school style romantic thriller, Allied feels both modern and cut right out of the 1940s. Gorgeously captured, designed, and staged, Allied is an - at times - lyrical and entirely compelling look at World War II espionage through the eyes of two lovers. Director Robert Zemeckis cannot help but constantly reference Casablanca with his two lovers meeting in a bar in Casablanca, but though the film is deeply indebted to the Golden Age of Hollywood, it is somewhat similar to Steven Soderbergh's The Good German. Another film that I love (sue me), that film attempts to take the style of film noir - going as far as shooting in black-and-white with German expressionist lighting - and tell a story that could have been told in the 1940s. Many found it to be a mess and, admittedly, Tobey Maguire is entirely out of place there. Allied suffered much the same fate as it tried to capture the same appeal of a romance not-really-melodrama-but-sort-of-melodramatic war film akin to the aforementioned Casablanca or another Humphrey Bogart film, To Have and Have Not.

That said, Zemeckis does not go the full nine yards like Soderbergh. Instead, he often channels films such as The English Patient or, believe it or not, Children of Men. Both far more recent, the two feel like a clear influence on some of the style of Allied, whereas the story and romance feels ripped out of 1940s cinema. For the former, the comparison is clear: war-set romance tale that partially occurs in the desert. It is clear from the trailer alone that Zemeckis had seen Anthony Minghella's stunning beauty of a film, with its style of desert shots clearly bearing influence as Zemeckis sets up stunning shots of the desert as one of the highlights of the film's cinematography. However, a sex scene in a car in the desert between Max Vatan (Brad Pitt) and Marianne Beausejour (Marion Cotillard) appears to also channel Minghella's film with the couple engaging in an extended sex scene as a sandstorm blows all around them. A similar scene also occurs in The English Patient, though without the sex. Instead, Ralph Fiennes and Kristin Scott Thomas simply chat and grow closer due to their small confines. One could argue that the raw passion between the two spies is their own way of sharing war stories like those shared by Fiennes.

Yet, Allied's action scenes seem akin to Children of Men. Perhaps not a direct influence, I admit, but a stylistic one nonetheless. Upon viewing Children of Men years ago, I was immediately struck by its action scenes as Clive Owen and company try to shoot their way out of various destroyed buildings. Of every film I have seen, this film still stands as the one that best simulated the action scenes of a video game. It put you in intimate contact with the action and made it feel as though you were doing it yourself. It is is a hard style to describe and it is not due to the POV. Instead, it simply feels like a video game. Allied's action scenes have the same feeling with Brad Pitt and Marion Cotillard shooting their way out of the ambassador's ball with bodies flying. The shooting and reactions of the men who are shot feels like a cut scene from a first person shooter as the story progresses before you regain control of the main character. Now, of course, this could just be CGI at play, but regardless, the scenes are incredibly tense, terrifically staged, and - again - I love how they are shot for the same reasons why the action scenes in Children of Men work: immediacy, passion, and chaos. However, the film also feels akin to Alfonso Cuaron's 2006 film in its camera work. Though not a continuous shot or anything, the camera in Allied feels free flowing. It floats around the characters and the locale, hiding behind storefronts or rushing ahead of the characters and awaiting their arrival in the frame or just waiting on the curb after they drove off in the distance. Capturing the beautiful production and costume design, the camera in Allied feels like an entity in and of itself with it trying ambitious shots that were unlikely to be seen in 1940s cinema.

Story-wise, the film shows the romance between Max and Marianne and, as the trailer shows, throws a wrench in their marriage with Marianne being accused of being a German spy. Deliberate, tense, and unpredictable, the film ditches the happy ending demanded by 1940s audiences and instead sees it to its logical conclusion: a torn relationship as a result of this accusation. No matter whether it is true or not, what was between them has been snuffed out due to suspicion and uncertainty. Brilliantly portrayed by Brad Pitt and Marion Cotillard, the two entirely sell both the rise and fall of the relationship. Captured in small subtleties, such as Pitt's Max lurking over Marianne in his uniform as he must go to work on his day off, the slow demise of the relationship due to her possible work as a spy is haunting and heart wrenching. From the excitement of a day off (the beginning) to the slow and sad realization that the one you love must leave (the fall), Allied captures the gorgeous nuances of this relationship in great detail. In depicting its suspicion, uncertainty, and haunting finale, the film really feels like a throwback to Alfred Hitchcock's Suspicion as our protagonist tries to feverishly determine if their spouse is the enemy or not via the help of others and their own sleuthing. Though occurring during WWII and various bombings, the center of this film is always its two lovers. In a gorgeous sequence where the Germans do an air raid on London as the Vatan's hold a party, Max rushes inside to rescue his wife and daughter. Though he knows she may be a spy, it hardly matters. Their love is real, even if they only met on an assignment. At the end of the day, he will do anything to protect her and his daughter Anna, even if it means betraying his country and supervisors. For both, their country is hardly the focus as they belong entirely to one another. As the world crashes around them, they find love in a hopeless place and refuse to let those crashes impact that love.

Gorgeously shot with impeccable attention to detail on the costumes and production design, Allied is a film that is deeply indebted to 1940s cinema, particularly the romantic war films of Humphrey Bogart with, as many have pointed out, Pitt playing a sort of Bogart-esque character as a reserved man whose heart stays firmly within his chest cavity, but will do anything for the woman he loves. Alongside him, Cotillard plays the mystery woman that Max Vatan comes to love. Willing to risk it all for her, she is a woman unable to return the favor (Casablanca) and must face the music, regardless of how much that love has meant to her as well. Beautifully romantic with excellent camera work, Allied's style may be far more modern, but its characters, acting, and storyline are all deeply indebted to classic Hollywood. Pulling off this tricky modernization of an old school tale with impeccable grace, Zemeckis proves he still has a sure hand all these years later.