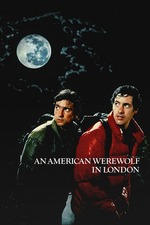 An American Werewolf in London is just one of those films that, for whatever reason, kept getting put on the backburner. Fortunately, today, I was in the mood for a John Landis directed 1980s horror comedy and would you look at that, An American Werewolf in London fits the bill. Perhaps the film's greatest flaw is simply not being long enough. Its 97 minute length is nice and concise, but it certainly leaves you wanting more and wishing that the film continued on, even if the age of the werewolves has come to a close. A fun and light horror comedy, An American Werewolf in London has excellent special effects, a fun and light tone, and yet is unafraid to broach the negative mental side effects of becoming a werewolf. While its spooks and laughs are its greatest weapons, its psychological elements are equally compelling.

After leaving a mysterious pub called The Slaughtered Lamb, American friends David (David Naughton) and Jack (Griffin Dunne) encounter a werewolf. The two had some hints, given the pentagram and general weirdness in the pub, that this town may have some weirdness about, plus a warning to "beware the moon" and stay near the road. As kids are prone to do, they forgot and wandered off the road. Attacked by a werewolf, Jack is killed and David, as he will learn, is set to turn into a werewolf. The lore in this film is excellent and really takes off as we learn that those killed by a werewolf walk the Earth and advise their werewolf killer to kill themselves in order to end the bloodline, allowing their victims to move on and no longer linger on Earth. For the werewolf, they turn into one with a full moon and must cope with seeing their victims on a regular basis. The emotional toll this takes on David when he sees Jack and others throughout the film drives him mad and questioning what is real all around him. It is a really interesting angle to add to a werewolf film and a great source of comedy undoubtedly, but also providing some emotional depth as we see the cost of becoming a werewolf on an average person. This emotional toll is also seen in the town where the initial attack takes place as we see them walk on eggshells to not alert anybody to what is going on and to practically deny to themselves that these werewolves are real.

Yet, the film's greatest accomplishments come via the special effects. From the excellent transformation scene to the progressive decomposition of Jack throughout the film, the special effects in this film are quintessentially 1980s to be sure, but still hold up in 2017. In particular, the transformation of David into the werewolf stands as the most impressive piece of this with the scene taking its time to show his slow transformation on the outside and the inside before showing his terrifying and fear-inducing final form as a werewolf. Immediately following it up with a truly thrilling sequence of David chasing a victim through a subway station that is not just well formed with a great attention to detail in the production design alongside (even hinting at the climax in a porno theater with a poster for the film playing there), merely adds a cherry on top of the icing of this cake.

An American Werewolf in London treads the tricky line between horror and comedy, yet does so marvelously. Its comedic undertakings can make its horror moments have a little less impact to be sure, but its horror still comes through in the aforementioned chase scene in the subway and other chase scenes, particularly the one to open the film with the werewolf circling David and Jack. These moments really speak to the film's ability to scare, but it is mostly more interested in making us laugh (given that Landis is directing) and in exploring the impact of becoming a werewolf on a man's psyche. An absolutely enjoyable experience that constantly delivers entertainment above and beyond the call of duty, An American Werewolf in London is an 80s classic that feels years ahead of it ahead in 1981. Funny, smart, and scary, An American Werewolf in London more than lives up to expectations.