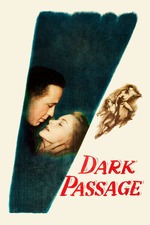 Dark Passage is a pretty incredible film. Using a lot of point of view for the first 37 minutes of the film, the film is about a man who escaped from prison - Vincent Parry (Humphrey Bogart) - who changes his appearance to avoid the police. Convicted of murdering his wife, he receives help from Irene Jansen (Lauren Bacall), a cabbie, and a plastic surgeon, all of whom do not believe he is guilty. Taking 37 minutes to show Bogart's face at all, that shot is merely of him in bandages. Up to that point, much of the film is shot from the point of view of Vincent, in order to hide his initial appearance from the audience before he turns into Bogart. Slightly after the hour mark, we finally get to see him as a post-operation Humphrey Bogart and to say I was impressed with how long it took would be an understatement. This really hints at how the film takes its time. It never rushes and keeps you guessing throughout, which is really what a film noir should be able to do.

The film, however, is largely just another excuse to put together real life lovers Bogart and Bacall in a film and, well, as those are prone to be, it is quite good. Director Delmer Daves' risks with the camera and the initial point of view pay off in a thrilling and mysterious film noir. Constantly viewing the opening from Vincent's point of view allows the audience to feel the tension, the fear, and the confusion as he escapes jail and encounters people who may or may not help him. Similarly, when he is quite dazed and tries to get home from the plastic surgeon, the point of view occasionally used in this sequence really highlights the disorientation and haze that he is in post-surgery. The film finds great tension and mystery when post-surgery Vincent is still picked out as an oddball by a detective. The subtle detail and tension regarding whether or not he would be busted keeps you on edge, much like the rest of the film. Throughout, Daves takes the mystery from the beginning and keeps it going with a constantly unexpected film that keeps you wondering whether or not Vincent was guilty and whether or not he could get away from the detectives.

Yet, the film is not solely about whether or not Vincent gets away. As with all film noirs, there is a case resting beneath the surface of all this style and tension. If Vincent did not kill wife or his friend, who did kill them? The reveal is great, but also further defines his hopelessness and status between a rock and a hard place. There is great mystery here, even if I did figure it out. From the small details, subtle evidence collection, and the full reveal as to the motives and the truth behind the murders, the film really is captivating in these moments and reaches a fever pitch of its noir genre.

Pairing together Bogart and Bacall was always a tremendous idea, as they had great chemistry. The finale highlighted this with the look they give one another from across the room. In that look, their romance always feels authentic and real, mostly because it was. Thus, pairing them as lovers always makes sense and Dark Passage feeds off of this chemistry in the more romantic moments. Acting-wise, the duo are always very good and that is very much the case here. Bacall outdoes Bogart in this one though with a smart and controlled performance as the woman he was always convinced of his innocence.

Mysterious, thrilling, and bold in its approach to Bogart's character, Delmer Daves's Dark Passage is a top-notch film noir. Pairing together the classic duo of Bogart and Bacall, the film is always captivating and thoroughly riveting with its ability to leave wondering how everything will turn out for those involved. Never slacking or slowing down, the film is fantastic entertainment.