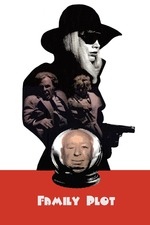 With a smile and a wink, Barbara Harris provides the perfect send-off for both Family Plot and for the career of Alfred Hitchcock. Though a middling effort from the legend as a whole, perhaps no director has a better final shot of their career than this tongue-in-cheek moment of recognition with the audience. In this case, only the audience as Harris' character knows what really happened. Yet, as a microcosm of his whole career, the shot feels akin to Hitchcock sitting down and winking at the audience, in a quiet bit of recognition that it is over, it was fun while it lasted, and that there will always be little jokes and bits that can be kept between the audience and Hitchcock for as long as his films are watched. Perhaps the best possible final shot of a legendary career, it is a shame that Family Plot fails to take the baton where Frenzy left it off, but despite some stumbles along the way, this is a light-hearted, thrilling, and thoroughly manic effort from Hitchcock that may be a lesser work from him but largely does work.

Blanche (Harris) is a fake psychic who is asked by a rich old woman to find her only heir, who she had sent away after her sister gave birth to him out of wedlock. Having to team up with boyfriend George (Bruce Dern) to track down the man, the two actually begin to make head way until they meet some opposition from some shady characters along the way. As they do this, Arthur (William Devane) and Fran (Karen Black) team up to steal expensive jewelry by holding powerful figures hostage in their cellar. As George's investigation begins to sniff around Arthur's past and the death of his foster parents, Arthur fears this his "perfect murder" may unravel. Deriving humor from the dramatic irony of knowing that Blanche and George want to give Arthur millions of dollars but Arthur thinks they are trying to turn him in to the cops for ransom, Family Plot is a rather light effort from Hitchcock that manages to find comedy in the farcical events it depicts.

Sporadically funny throughout, Family Plot is certainly one of those films that is never truly funny outright, but largely comedic in its characterizations and situations. Perhaps the greatest example of this is with the character of Arthur Adamson. Ringing his hands together with a creepily crooked smile adorning his face, Arthur is a man that is easy to dislike, but these actions are just so creepy they become kooky. It is like a heightened version of a Norman Bates type of character that escaped a serious horror film, became heightened by 100x, and entered into the comedic world. Toss in some great moments - kidnapping of a Bishop during service - and Family Plot is certainly a funny/quirky film at times, but it is hardly consistent. Instead, Hitchcock tries to awkwardly balance this black comedy with the film's thriller foundations and does not really get the combination right.

However, fortunately, the film is a Hitchcock thriller to some degree. Suspenseful and constantly capable of keeping one on the edge of their seat, the film is buoyed by the excellent score from John Williams that sets the perfect tone. This ominous and suspenseful atmosphere bolsters the film tremendously and gives it that undercurrent of dread, especially when Fran is on-screen in her costume picking up her and Arthur's score. As a black comedy/thriller, it is hard to really say this film is a truly suspenseful work, but Hitchcock comes close to turning it into one, though the ending leaves a lot to be desired. Bubbling up with anticipation, the anticlimactic solution to all of the problems really leaves Family Plot feeling like an unsatisfying work without any semblance of pay-off. It is a mildly funny climax, but just leaves that thriller element flapping in the wind without any final punch to make it all come together.

As a black comedy and thriller, Family Plot features a lot of excessive and theatrical acting, as Hitchcock tries to find comedy in the excess and thrills in their sinister intentions. With these comically sinister figures - Arthur especially, though Blanche as well given her swindling efforts as a psychic - found throughout the film, it sets a really quirky tone for the film that Hitchcock struggles to balance with Williams' excellent score and his own thriller-based instincts. While many of these films are cut-and-paste out of a Hitchcock greatest hits area with the tension they create and the suspense he is able to conjure out of thin air, the following scene will almost always be some off-beat somewhat comedic moment. Never gelling or finding the right tone for the film, Family Plot feels disjointed and like an odd watch. It never really commits to either extreme, instead playing somewhere in the middle and, as a result, it is tough as a viewer to really come to terms with what is happening. Is the film funny and quirky send-up of Hitchcock's work as a whole? Is it a thriller? Both are likely partially true, but as it is not particularly funny and this humor undermines what could have been a great thriller, Family Plot winds up being a wholly average work.

The Talk of the Town