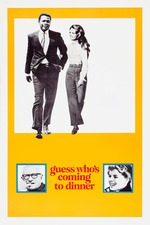 Guess Who's Coming to Dinner is an impeccably smart film. For 1967, it approaches the issue of interracial marriage without judgment and without prejudice. Though the question of whether John (Sidney Poitier) and Joanna (Katharine Houghton) may marry is put to Joanna's white parents Matt (Spencer Tracy) and Christina Drayton (Katharine Hepburn), the Drayton family is not the only one put on trial. Their black maid Tillie (Isabel Sanford) and John's parents, John Sr. (Roy E. Glenn) and Mary Prentice (Beah Richards) are forced to tackle their own preconceived notions about interracial marriage. As a result, the film does not just attack whites for their prejudice, but blacks as well. After so many years being told that this was wrong, no matter one's politics, seeing your child come home with a person of the opposite race is somewhat of a surprise. In this film from director Stanley Kramer, every person of every race concerned is forced to ask themselves whether or not they accept this pairing and why they feel the way that they do. This allows the film to not damn any specific race, instead it shows it as an issue that everybody must confront and overcome to see the truth: love is love.

Smartly confronting each player in the situation and slowly bringing them all to the side of John and Joanna after each character is allowed to voice their concerns and learn their miscalculations, Guess Who's Coming to Dinner is a film that is about learning. It is not about scolding or putting those racists in their place. There may be a time for that, but it is not in this time. Rather, it is to force those who are prejudiced to watch this film and realize the error of their ways. The stubbornness and refusal to change that has warped their line of thinking into believing that there is a logical reason as to why blacks and whites should not marry. By putting everybody and their internalized prejudice to task over this potential union by showing the authenticity and purity of the love shared by these two people while also pointing to that love repeatedly as to why any prejudice is illogical, Guess Who's Coming to Dinner is a film that lives up to its obvious hype as a crucially important film. It has a message. It communicates that message without preaching. It explains why it is right, without damning those who are a bit taken aback (unless it stems from hatred or stupidity/ignorance, which is fair). It offers evidence to the fact that it is right. In today's day and age, this is far too uncommon in these divisive times.

What does not hurt this effective communication is the film's generally light tone. Finding comedy in the commentary of its participants and their reactions, the film rides on the natural comedic chemistry shared by Katharine Hepburn and Spencer Tracy, which allows it to become a deeply funny film. When John's parents come in and see Joanna for the first time, the comedy only improves with the hilarity found in the awkwardness and shock of all relevant parties and being of the highest order. While the film is not as witty as screwball comedies or joke-reliant like comedies that would follow it in the years to come, Guess Who's Coming to Dinner has a very human sense of humor. It is more subtly observational and relies upon the audience to pick up the comedic moments that occur in the background, in deliveries of lines, or in reaction shots. The natural and entirely human comedy found in this film is the type of comedy one can find in their own home and, as a result, it makes the Drayton home feel like the audience's very own. By doing this, it makes the issues put forth feel relevant, intimate, and pertinent to the lives of the audience, which is a very important step that is often missed when making an issue-based film.

In writing its romance, Guess Who's Coming to Dinner is undeniably rather cute. Rushing into love with 37-year-old John and 23-year-old Joanna falling head over heels with one another, the two have no misconceptions about the world that awaits them, but they are nonetheless infatuated with one another. The writing is obviously intentionally cute to make their love more readily apparent to those who still harbor prejudice in their hearts, but it is still equally communicated by their interactions with one another and with others. Though he loves her, John is not willing to take her from her parents without their blessing, for fear of the pain it will cause Joanna. It is a selfless act she is unaware of, but underscores the love and respect he feels for her, while also having an awareness of the challenges before them. On the part of Joanna, her radiancy is immediately felt by Monsignor Ryan (Cecil Kellaway) when he sees her for the first time with John and it is felt by the audience in equal measure. She is joyous when she is with John and it is easily communicated that she is starstruck through the physical and facial acting done by Katharine Houghton. By the end of the film, it is a challenge to find why these two should not be wed, purely by spending just under two hours with them. By posing the film as a sort of mock wedding where the parents are asked to object to this holy union that is approved of by a priest, the film subtly puts the audience in the same boat. We see the love. We see the arguments. We see the challenges. Do we have any objections before they are quickly whisked away to say "I do" or can these two young lovers join one another in holy matrimony?

A funny, authentic, and tremendously acted film about an issue that was paramount in 1967, Guess Who's Coming to Dinner's incredible approach to the issue is what still makes it relevant today. Though the right to marry between the races was granted six months before the film came out, its confronting of prejudice and discovering why somebody would oppose their child marrying somebody of the opposite race is what makes it relevant then and even now. In this divisive time, it is not enough to just write off people as racists or prejudiced. Instead, one must ask why they feel that way and why they hold those beliefs. This applies not just to interracial marriage, but to same-sex marriage, immigration as it pertains to Muslims, or any other issue that confronts prejudices held by individuals. It is this longevity and timeless nature of the film that makes it feel so fresh, which is only bolstered by its natural acting performances from the whole cast, the lovely and cute romance, and the very authentic familial humor the film embraces. An important film in 1967, Guess Who's Coming to Dinner manages to be just as important in 2017, as underscored by Jordan Peele's Get Out.