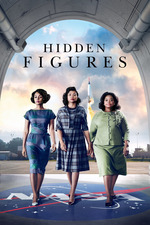 Lord, let us give thanks for the miracle you have given us in your infinite wisdom, generosity, and mercy. Lord, thank you for blessing the world with Janelle Monae and her wide range of talents. For convincing her to act and pursue a career in Hollywood, we are unworthy of your bounty Lord, for we are but simple sinners, doomed to be imperfect. Yet, you have graced us with the sole being of perfection among us and for that, we are eternally grateful. Amen.

Aside from Monae though, Hidden Figures is a pretty simple story. Telling the real life story of the black women who helped to put a man in orbit and land on the moon, it is an inspirational feel good story that is by-the-numbers. Shoving the story of these women into the feel good biopic cliches, Hidden Figures loses some of its impact as a result. Fortunately, feel good movies are always going to leave you with a goofy smile on your face after watching it and Hidden Figures fits the bill there. That said, do not expect it to be different from any other inspirational biopic you have ever seen.

Blending in some light comedy to brighten the racial tensions of the story, the film actually does a solid job showing the racism the girls face working for NASA. The film really defines the racism in looks with the girls being stared down upon entering any room. Co-workers assume they cannot handle the work, only to be shown that they can. Yet, first impressions often define treatment and the women of Hidden Figures are never treated perfectly by co-workers. That said, as a PG-rated move, there are n-bombs here, which leaves the film to resort to subtle racism. Honestly, this works better for a film of this type as, by 1961, the tides were turning enough to force people to not be so overt and brash with their racism in the workplace. Hidden Figures really captures this with things still labeled as being for "coloreds" or the girls being excluded even when they should be filled in on the information. The film takes the same approach to sexism with people expressing obvious sexist thoughts that they are taken aback to learn are sexist. Towards the end of the film, Vivian Mitchell (Kirsten Dunst) tells Dorothy Vaughan (Octavia Spencer) that she is not racist to which Dorothy tells her that she believes she thinks that is true about her, highlighting the subtly of the film with racism and sexist thoughts. The film clearly tries to bring them to the surface and does, but the racist and sexist actions of characters in the film are often done simply because it was the way things were and colored people or women doing these things was completely unprecedented.

However, while the film largely handles the racism elements over it, it cannot help but burst into bombastic monologues about the ills of racism and the importance of overcoming it. These monologues are largely done by Katharine Johnson (Taraji P. Henson) and Al Harrison (Kevin Costner). The director of the Space Task Group, Harrison lets the racism occur until Katharine informs him about it, at which point he puts an end to it. Clearly seen as a white savior of sorts for Katharine in particular, Harrison repeatedly makes large displays of inclusion, yet still excludes Katharine and kicks her out at the request of his superiors, in spite of her talents. He makes the most attempts of anybody to include her, but clearly does so begrudgingly. This does not stop the film, however, from using his character as a white savior to lend a helping hand to the disenfranchised among us. Returning to the original purpose of this paragraph, the film may do a good job at crafting the air of racism and sexism around of every turn. However, it lacks the subtly in its dialogue given to its black characters to really pull it off. As a result, the film plays out with Katharine just telling people off left and right. While she is correct and free to express her thoughts, it feels to in your face and overt. Maybe she was like, I do not know, but as a film, there are ways to show her fight back and prove them wrong without having to jump up in their face to do so.

Of course, these emotional monologues only further serve to make the film feel conventional. What good is a feel good and inspirational film without moving speeches by the oppressed? Regardless of whether the real women were like this, the characters in the film are pigeon holed into a palatable package that will not offend white people like slave dramas often do. Instead, these stock characters allow white audiences to largely look past their race and have a good time. That said, the rise, the breakthrough, the challenge at the end, the fall, and then the final ascension to praise, are all tried and true inspirational feel good biopic cliches. Director Theodore Melfi ensures that this film hits each beat on the nose and adds bland direction to the concoction to ensure that Hidden Figures is a by-the-numbers Hollywood film that has incredible marketability. This is really what bogs the film down. I can handle the over-the-top monologues that are a staple of the genre, but the bland acceptability and slightly above average nature of the film is simply too much. This is a film designed to be good enough and important enough in the story it tells to garner good reviews from critics and audience members alike, but not good enough to actually be revered as a great film. It is a crowd pleaser, through and through.

Fortunately though, nobody told Janelle Monae that this was nothing but a straight forward crowd pleaser as she brought her A+ game. Though, I feel she may have nothing but an A+ game. Between this and Moonlight, she has let everybody know she can act with the best of them and I cannot wait to see her in another film. As Katharine Johnson, Henson turns in a workmanlike performance and definitely nails the role. Otherwise, however, Hidden Figures is just what you think it will be. It has enough humor and tackles the social issues at hand well enough, while remaining inspiring and often moving. If you want it to be a great film, however, it will likely miss that mark. As it stands, it is merely above average to pretty good. Seen in companionship with St. Vincent, Melfi's previous feature, it is clear that Theodore Melfi is driven to become the most bland, but acceptable director that Hollywood has had in a while. Cannot wait to see what cliched storyline he takes on next. Personally, I cannot help but feel that these women deserve better than to be turned into feel good movie stock characters and that is where my slight animosity to this film is derived from.

Also, almost forgot to mention: Could they stop playing that annoying Pharell Williams song from the trailer? It is played approximately four to five times in the film and is as grating as the rest of his discography.

EDIT: Almost forgot to mention, another fault here is the science and technological speak. The film offers no helping hand to the audience and leaves us grasping at straws as to what everybody is talking about. I appreciate when films do not dumb themselves down, but some explanation would have been greatly appreciated.